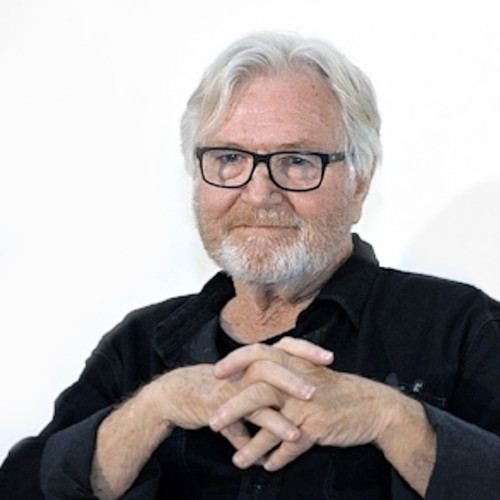 Laddie John Dill’s (Chouinard BFA 1968) gorgeous artwork series for 50+50, CalArts Light, 2018, which the artist refers to as a “Light Sentence” is made from neon tubes filled with argon and mercury, which are multicolored and fashioned by Dill’s hand.

Dill began his career in the late sixties as part of the California Light and Space Movement, by experimenting with materials developed for fields other than the arts, such as neon lights, more aptly described as luminescent tubes charged with argon or mercury, and aluminum of the 6061 type, which are most commonly used in the airplane industry. Dill has been crafting light and earthly materials like concrete, glass, sand, and metal into luminous sculptures, wallpieces, and installations since the 1970s. Referring to his choice of materials, Dill explains, “I was influenced by [Robert] Rauschenberg, Keith Sonnier, Robert Smithson, Dennis Oppenheim, and Robert Irwin, who were working with earth materials, light, and space as an alternative to easel painting.” When Dill does use canvas, he paints with pigments derived from cement and natural oxides. Introducing these materials to the art world, Dill has said, “I am a painter who works with the typical materials of sculpture. I use rough and raw materials in a poetic sense.”

New York Times art critic and writer Ken Johnson has said, “At the end of the 1960s the West Coast Light and Space artist Laddie John Dill began producing electric light works out of custom-made, blown-glass tubes in a lush palette of jewel-bright colors… Some are made of many short pieces, some of longer parts and fewer colors. They glow beautifully like strings of illuminated glass beads. Mr. Dill called these works Light Sentences, likening the segments of color to words grouped in phrases and sentences. This suggests that light itself could be a transcendental language. But the effect of these works in concert is less verbal and more like trippy visual chamber music.”

Laddie John Dill was born in Long Beach, California in 1943. He graduated from Chouinard Art Institute in 1968 with a BFA degree. After graduating, Dill became a printing apprentice and worked closely with established artists, like Robert Rauschenberg, Claes Oldenberg, Roy Lichtenstein, and Jasper Johns. Dill’s first solo exhibition in New York was with Ileanna Sonnabend Gallery in 1971, and his work is in the permanent collections of national and international institutions such as the Museum of Modern Art in New York; the Los Angeles County Museum of Art; Museum of Contemporary Art in Los Angeles; the San Francisco Museum of Modern Art; the High Museum in Atlanta; The Phillips Collection and the Smithsonian in Washington, D.C.; the Chicago Art Institute, IL; the Louisiana Museum of Modern Art, Denmark; Pio Monte della Misericordia, Italy; the Museum of Contemporary Art San Diego; the Hammer Museum, Los Angeles; and Museo Jumex, Mexico. He currently lives and works in Venice, California where he maintains a studio.