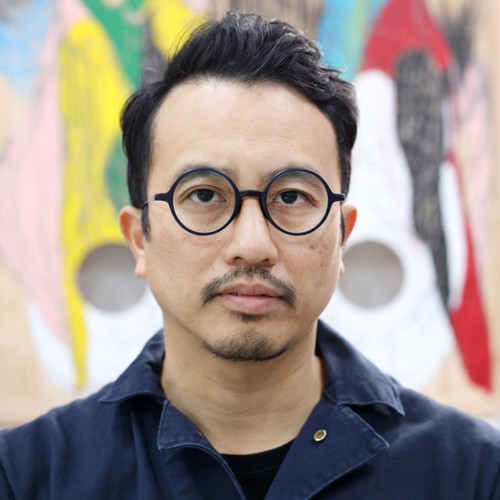 For CalArts’s 50th Anniversary, artist Naotaka Hiro (CalArts MFA 2000) has created a mesmerizingly beautiful series of 15 monoprints by hand-applying paint, crayon, and graphic pencil to a set of 15 silk­screened prints. The original drawing which forms the silkscreen base of each monoprint was made by the artist on a clear mylar sheet, scaled 35 × 44 inches, mirroring the artist’s torso.

In the words of the artist, “My drawings reflect my body parts, shapes, and movement. I also work with chance and error as I draw. The foundation of my work, in general, stems from the idea of the unknown—the world of my body parts, which I am unable to see and thus unable to confirm. The dilemma of the unknowabil­ity of my body serves as a creative point of departure—a place (unknown, blindness, awe) from which my imagination may create. It usually starts with the body parts, to which I am essentially blind: the subject, an unknown world. The depressing yet unavoidable fact is that my body is only understandable to myself when considered through a mediated form, such as a camera or a mirror. My works, thus, are connected through an image resulting from my encounter and engagement with the unknown.

“I work on various sizes of paper. I draw on smaller papers in a closed space, most of the time on the studio desk, and often while I travel, I am in a hotel room, in a hotel bathroom, or on a bed. The larger drawings are then pinned on my studio wall, on a drawing board or laid flat on the floor. The 32 × 42-inch scale drawings, for example, I consider [to be] an advanced stage of the smaller drawings. While small drawings are direct outputs of ‘raw’ image, [the] larger ones…retain an aspect of ‘rawness.’ For example, I physically lean against or lie on the paper. The drawing shows a remnant of a scan of myself and the process. Consequently, these 32 × 42-inch drawings often deal with half of my body (upper/lower parts), whereas larger 48 × 72-inch drawings deal with my entire body.”