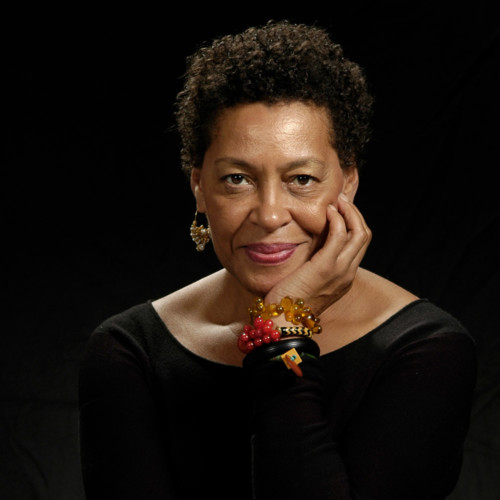 Carrie Mae Weems (CalArts BFA 1981) has created Queen B, 2018/2019 for CalArts’s 50+50, a sumptuously beautiful photograph of artist Mary J. Blige, presented in a stained maple frame chosen by the artist, in an edition of 10. As Weems says, “Over the years, and beginning with the Kitchen Table Series, I’ve made any number of images in both photography and video of women examining themselves—considering who they are, what they represent and to whom. This photograph of the famed Mary J. Blige, taken at a time of tremen­dous upheaval in her personal life, continues this ongoing investigation.” Considered one of the most influential contempo­rary American artists, Carrie Mae Weems has investi­gated family relationships, cultural identity, sexism, class, political systems, and the consequences of power. Determined as ever to enter the picture—both literally and metaphorically—Weems has sustained an ongoing dialogue within contemporary discourse for more than 30 years. During this time Weems has developed a complex body of art employing photographs, text, fabric, audio, digital images, installation, and video. In a recent review, New York Times critic Holland Cotter wrote, “Ms. Weems is what she has always been, a superb image maker and a moral force, focused and irrepressible.”

Weems has participated in numerous solo and group exhibitions at major national and international museums, including The Metropolitan Museum of Art, New York, The Frist Art Museum in Nashville, the Solomon R. Guggenheim Museum, New York, Prospect.3, New Orleans, and the Centro Andaluz de Arte Contemporáneo, Seville, Spain. In September 2018, Carrie Mae Weems: Strategies of Engagement opened and was organized by the McMullen Museum of Art, Boston, and traveled to the Allentown Art Museum, Allentown, Pennsylvania.

Weems has received numerous awards, grants, and fellowships, including the prestigious Prix de Roma, The National Endowment for the Arts, The Herb Alpert Award in the Arts, the Anonymous was a Woman Award, and the Tiffany Award. In 2012, Weems was presented with one of the first U.S. Department of States Medals of Arts in recognition of her commitment to the State Department’s Art in Embassies program. In 2013, Weems received the MacArthur “Genius” grant as well as the Congressional Black Caucus Foundation’s Lifetime Achievement Award. In 2014, she received the BET Honors Visual Arts award and the Lucie Award for Fine Art photography, and was one of four artists honored at the Guggenheim’s International Gala.