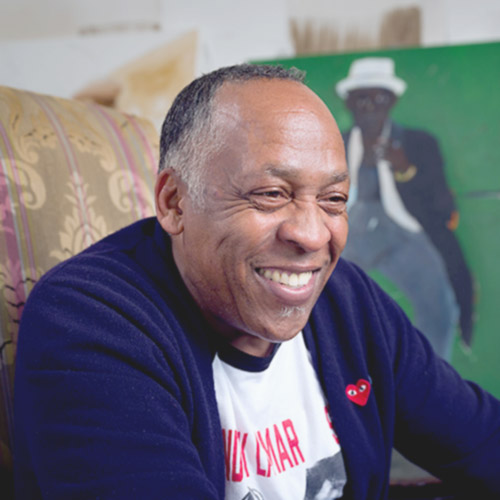 Courtesy of the artist and Blum & Poe

Courtesy of the artist and Hauser & Wirth

CalArts is delighted to announce the publication of Henry Taylor’s Untitled, 2020, a new limited edition serigraph print, in an edition of 20, printed by El Nopal Press and published by Lisa Ivorian-Jones. This arresting and powerful work depicts Malcolm X being interviewed by reporters in 1964, the same year that President Lyndon Johnson ran for re-election. Malcolm X referred to 1964 as “the year of the ballot or the bullet”, in his call for a global fight for racial justice, stating, “We intend to expand [the freedom struggle] from the level of civil rights to the level of human rights.”

As homage to beloved CalArts professor and Los Angeles based late artist John Baldessari, Taylor conceived and completed this series during the Covid-19 pandemic. In this work, Taylor places stylistic and bold brightly-hued dots over the faces of Malcolm X and the others depicted in the original image captured by Herman Hiller. In so doing, he expertly pushes this historic photograph of Malcolm X firmly into the present and begs a revisitation of both the words of Malcolm X and the work of Baldessari. Taylor provides a poignant reflection on a tumultuous year—one defined by social unrest and racial injustice in the United States, starkly and inescapably laid bare during the Covid-19 pandemic and election.

In 2018, Taylor was the recipient of The Robert De Niro, Sr. Prize in 2018 for his outstanding achievements in painting. Taylor’s work was presented at the Whitney Biennial at the Whitney Museum of American Art, New York NY in 2017 and 58th Venice Biennale, Venice, Italy in 2019. Taylor will open a solo exhibition at Hauser & Wirth Somerset in February of 2021. A major survey exhibition of his work is also due to open at the Museum of Contemporary Art, Los Angeles, in the Spring of 2022.