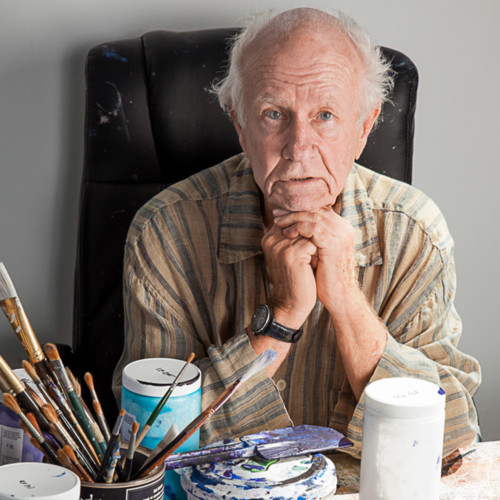 Edition of 15 with five APs (each unique)

In honor of the 50th Anniversary of CalArts, Joe Goode (Chouinard 1961) has returned to one of the earliest subjects of his artistic practice—the milk bottle—to create the edition Dangerous Territory, 2018. Continuing the artist’s tradition of finding the new within the commonplace, Goode has created his very first hand-manipulated milk bottle edition and first-editioned sculpture using contemporary production techniques that would not have been available to him some 50 years ago when he first began his renowned milk bottle paintings. The process of producing this edition began by 3D-scanning a glass milk bottle, and subtly manipulating the digital image on the computer by adding two holes mimicking a piercing entrance on one side and a larger exit on the other. This image was then 3D-printed, and then more overtly manipu­lated by hand (and hammer) in the studio. The 3D-printed and hand-manipulated object was re-scanned and re-printed in a series of 15, each one individually and uniquely hand-painted by the artist.

The manipulations are reminiscent of Goode’s early series of Environmental Impact paintings that were created by shooting the surface of the paintings with a shotgun. To further emphasize the destructive manipulation made to the bottle and add a unique element to each, Goode individually applied red paint to each bottle, imbuing them with life while simultane­ously suggesting something more sinister (or serious). In merging the earlier subject and methods with recent technological advances in 3D-printing and scanning, Goode has created a distinct new body of work that further extends the life of the milk bottle into the 21st century. It is nostalgic in our modern times.

Joe Goode was born in Oklahoma City in 1937. He attended Chouinard Art Institute in Los Angeles from 1959 to 1961. Over the past nearly 60 years, his work has been shown in galleries from Los Angeles to New York, London to Tokyo. His work has been featured in museum exhibitions at the Whitney Museum of American Art; the Museum of Modern Art, New York; the Los Angeles County Museum of Art; and many more.

Goode’s work can be found in numerous museum collections, including the Art Institute of Chicago, the National Gallery in London, LACMA, the Museum of Contemporary Art in Los Angeles, and MoMA. He currently lives and works in Los Angeles.

For sales inquiries contact Publisher Lisa Ivorian-Jones at 212-229-6762 or inquiries@ivorianjones.com