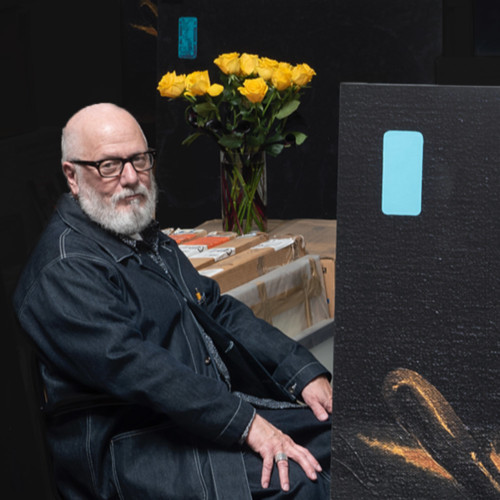 Edition of 10 with two APs and two PPs (each unique)

For the 50th Anniversary of CalArts, Stephen Prina (CalArts MFA 1980) has created English for Foreigners Redux, digital prints mounted to canvas to create an edition of 10 diptychs, each one with unique hand-applied oil paint, in a range of different colors. The right panel is a digital print of a painting Prina made in 2017 titled, English for Foreigners—a reproduc­tion of Georges de La Tour’s Saint Joseph the Carpenter, ca. 1642, made to scale, and in burnt umber mono­chrome, in the manner of a Warhol portrait. The left panel is a close-up of the mallet that lies at the feet of the saint. Tucked into the upper-left-hand corner of each of the two panels is a one-to-one outline of an iPhone 7. Prina has individually hand-painted oil monochromes on each panel, in a range of glazed, colored fields, the iPhone shape branding both panels with a one–to–one scale that we intuit because of its designed relation to the hand. The relay race therefore begins with de La Tour’s original St. Joseph the Carpenter, and proceeds to Prina’s first copy of it (made when he was a boy of 13) to English for Foreigners, 2017, to its most recent iteration, the scanned and digitally printed version, which serves as a structural model for Prina’s CalArts edition, English for Foreigners Redux. Details are rendered digitally, recombined, and then differentiated with the hand-painted section within the confines of a handheld object of communication.

Stephen Prina was born in 1954 in Galesburg, Illinois. He lives and works in Los Angeles, California and Cambridge, Massachusetts, where he is a Professor in the Department of Art, Film, and Visual Studies at Harvard University. He studied first at Carl Sandburg College, Galesburg, (AA 1974), followed by Northern Illinois University, DeKalb, (BFA 1977), and California Institute of the Arts, Valencia, (MFA 1980).